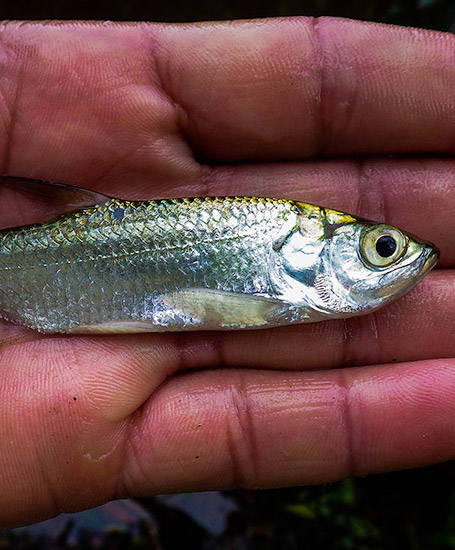 Juvenile tarpon depend on mangrove backwater wetlands and creeks as nurseries. Without such habitats, few juveniles would survive to become adults. Unfortunately, mangroves are in decline worldwide: globally, approximately 35 percent of mangroves have been lost, and continue to be lost at a rate of 2 percent per year; in Florida, approximately 50 percent of mangroves have already been lost, and degradation of these habitats continues. The past and ongoing loss of juvenile tarpon nursery habitats is a major reason that a recent International Union for the Conservation of Nature scientific assessment classified the tarpon population as “vulnerable.”

Even when coastal mangroves and salt marshes are protected, which limits direct impacts from development, much of the uplands have been developed or their freshwater flow patterns altered, thus degrading habitat quality of the adjacent mangrove and marsh habitats. Although many mangrove habitats don’t appear to have suffered direct damage (such as from clearing or dredging), the effects of upland habitat degradation on mangroves are just as damaging.

In January 2016, BTT began its Juvenile Tarpon Habitat Mapping Project, collaborating with anglers to identify nursery habitats harboring tarpon 12 inches or less and assessing them as natural or altered/degraded. Over 65 percent of the angler-reported habitats were classified as altered. This information is used by BTT to prioritize areas for restoration. This important habitat work is ongoing (contact us at info@bonefishtarpontrust.org if you would like to report a juvenile tarpon habitat), and has expanded to include a collaboration with the Florida Fish and Wildlife Conservation Commission. 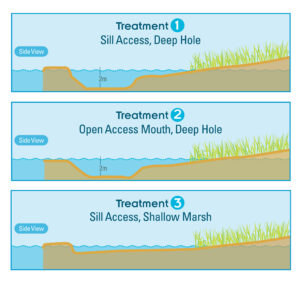 One way to address the loss of coastal habitat is to restore marginally degraded areas. To achieve this goal, BTT has collaborated with the Charlotte Harbor National Estuary Program, Southwest Florida Water Management District, and the Florida Fish and Wildlife Conservation Commission to develop three different nursery habitat designs in canals in the Coral Creek Preserve near Placida, Florida. Each of the designs is intended to mimic a natural system.

BTT recently completed surveys at Coral Creek, as the final step in this project. This included PIT tagging all captured juvenile tarpon, which enabled us to measure growth rates, estimate survival rates and abundance, and track tarpon movement throughout the various treatments. Data will provide us with a better idea of what juvenile tarpon need to thrive, and we’ll apply our findings to a list of priority sites for habitat restoration.

We are also working with the Florida Department of Environmental Protection to restore more than 100 acres of degraded mangrove wetlands in Rookery Bay south of Naples, FL. This project will restore tidal connections to mangroves that were disrupted by coastal development and roads. Once reconnected, juvenile tarpon (and many other species) will have access to this important habitat. We expect this project to be complete in 2024-2025.