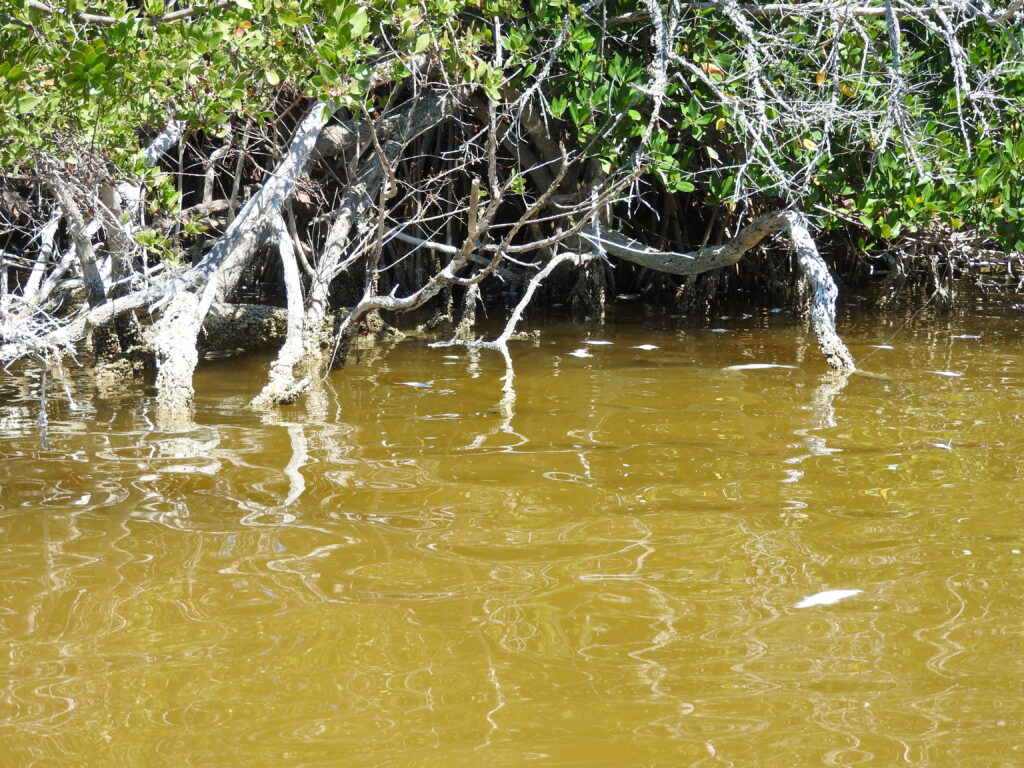 Florida, a state that depends on water – fresh, estuarine and marine – for its economy and cultural identity more than any other states is in a dire situation of its own making. Decades of water and natural-resource mismanagement, recently accelerated, are coming home to roost. The result of this mismanagement has been habitat loss and degradation, freshwater flow alterations, and poor water quality – a three-headed monster that is negatively impacting our fisheries.

The health and size of a fish population depends upon the health and amount habitat available to fish and their prey. Florida has already lost a significant amount of habitat: about 50% of mangroves; more than 9 million acres of wetlands; more than 2 million acres of seagrass; and in some estuaries up to 80% of oyster reefs. Plus, some of the remaining habitats are in poor health. All of these habitats are essential for one or more of the fish we chase on the flats – bonefish, tarpon, permit, snook, redfish, seatrout. We must restore habitats to restore our fisheries.

Alterations – changes to the timing, locations, and amount – of freshwater flows into coastal waters causes major ecological damage. For example, the watershed of the Caloosahatchee River once was limited to southwest Florida. It now drains Lake Okeechobee’s watershed, which stretches to Orlando. And the Everglades and Florida Bay are nearly entirely cut off from the freshwater flows they used to receive from this same watershed. A similar scenario plays out at smaller scales for Florida’s other coastal waterways. Changes to freshwater flows cause dieoffs of seagrass and oysters, and kill many prey species that gamefish rely on for food.

Far too many nutrients are entering freshwater lakes, streams and rivers, which then empty into coastal waters. These nutrients come from Florida’s phosphate-mining industry, outdated sewage infrastructure, extensive use of residential septic systems, agricultural runoff, residential use of fertilizers, and stormwater runoff. These nutrient sources not only contaminate the surface waters, but also the aquifers – the amount of nutrients in Florida’s groundwater are far too high. These groundwaters then seep into coastal waters through Florida’s limestone base. These nutrient-filled waters are causing damaging algal blooms throughout the state.

In recent years, there have been harmful algal blooms (HABs) in the Caloosahatchee River, St. Lucie River, St. Johns River, Florida Bay, Indian River Lagoon, along the Gulf Atlantic coasts. Indeed, much of Florida’s estuarine waters have been impacted by HABs in recent years. This has severely negative impacts on habitats and the fisheries they support.

Whether naturally occurring or introduced, the organisms that cause HABs are fueled by nutrient pollution that is worsening the situation. A scientific study published in 2007, for example, found that red tide was 20 times more abundant in coastal waters (where it encounters nutrient-laden runoff) than in offshore waters where red tide originates. The study also found that red tide was 13 to 18 times more abundant in recent years (1994-2002) than historically (1954-1963), and that the seasons in which red tide occurred had expanded from mostly in fall to now include fall, winter, and spring. The frequency, intensity, and spatial coverage of other HABs are also increasing. Moreover, the occurrence of algae blooms in general, including species that aren’t classified as Harmful but can also cause ecological damage, is also increasing.

Similar crises are occurring throughout Florida. Because Everglades restoration has stalled, not enough freshwater flows from Lake Okeechobee into the Everglades and then into Florida Bay. In 2016, this lack of freshwater caused algae blooms, fish kills, and an extensive seagrass die-off in Florida Bay. The water not flowing into the Everglades is instead being discharged into the St. Lucie River and Caloosahatchee River, where it has caused a harmful algal bloom so toxic that human contact is dangerous. The nutrient-laden water flowing out of the Calooshatchee River is also a likely source for enhancing red-tide blooms.

Separately, a recurring harmful algal bloom in the Indian River Lagoon, this caused by a “brown tide,” has resulted in extensive seagrass die-offs and fish kills. In recent years the St. Johns River has experienced harmful algal blooms of its own. Even some of Florida’s famous freshwater springs are experiencing algae blooms. The list goes on.

Although these algae blooms are separate events, the negative impact on our fisheries and their habitats is the same.

All of this has a negative impact on Florida’s economy. The combined annual economic impact of recreational and commercial fisheries is nearly $27 billion, more than any other state, which supports thousands of jobs. These fisheries depend upon good water quality and healthy habitats. As the health of Florida’s water and habitats has declined, so have the fisheries – incomes have declined, jobs have been lost, and businesses have closed. Recent reports also show a decrease in real estate values in areas impacted by HABs.

How to Improve Florida’s Water Quality

The rate of Florida’s environmental decline has increased in recent years, but it has been long in the making. It will be similarly long in recovery, but with perseverance and persistence we can greatly improve our water quality. This means that we have to resist the temptation of following schemes that promise short-term solutions, and don’t actually fix the causes of our water and habitat issues. We need to focus on fixing the problems, including: modernizing sewage infrastructure, septic-to-sewer conversion, reducing agricultural fertilizer and contaminant runoff, fertilizer ordnances to significantly reduce nutrients in residential runoff, water flow restoration. Only with this long-term approach that addresses the causes of our current situation will this problem be addressed.

We can do this, we just need to make it a priority and make sure our policy makers do the right thing.