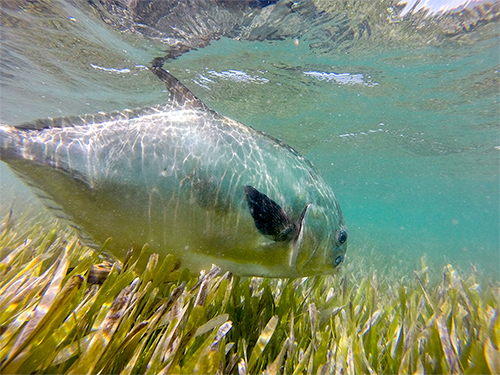 The coastal habitat mosaics of Mexico and Belize have long supported a rich and diverse flats fishery that includes bonefish (Albula spp.), tarpon (Megalops atlanticus), and permit (Trachinotus falcatus), as well as snook (Centropomus spp.) for catch and release. This fishery in Belize has an annual economic impact that exceeds $50 million (USD), supports thousands of jobs, and helps to maintain an important coastal culture. Although an economic study has not yet been conducted in Mexico, the thriving flats fishery in Ascension Bay, as well as flats fishery outposts in Espiritu Santo Bay and Xcalak among others, is an example of the socio-economic importance of the fishery in Mexico. Despite the importance of these fisheries, fisheries management is difficult because of an overall lack of scientific data, and inadequate education programs and conservation strategy to guide and strengthen the resource management decision-making process.

BTT used scientific methods develop a strategic plan for Belize and Mexico. This plan has become BTT’s framework for the Belize-Mexico Initiative, and is comprised of three components: science, education and conservation. The science component will generate information. The information will then be used in education and awareness programs to inform diverse sectors (communities, education, management and conservation) using diverse mediums and materials. Together the science and education components will lead to changes in conservation and management decisions in both countries.

The Belize-Mexico Initiative will build on the BTT’s foundation with growth over time. The overall goal is to help improve the quality and sustainability of the flats fishery in the Yucatán Peninsula of Belize and Mexico.

This project aims to determine the seasonality of movements associated with foraging (feeding and predator evasion) and spawning (to and from). This effort will begin in the central to northern coastal area of Belize and include the southern area of Mexico (Chetumal Bay and Xcalak). The aim is to mark approximately 4-6,000 permit and recapture 300-400 permit in three years. The findings will be essential for resource managers to better protect flats habitats by knowing when (time or date) and where (site or area) permit movements occur.

This project will be a collaborative effort that will engage managers, communities, education, and tourism sectors of Belize. This project will be country-wide and will start in the central to northern coastal area of Belize. BTT will partner with co-managers (Hol Chan Marine Reserve, Sarteneja Alliance for Conservation and Development and Turneffe Atoll Sustainability Association), fisheries (Caye Caulker Marine Reserve), local tour-guide association and other non-government organizations to: 1) create more educational knowledge on fish, habitats and their socio-economic importance; and 2) generate awareness to a general and widespread audience. This project will also be conducted in all three states of the Yucatán Peninsula of Mexico.

Economic impact of flats fishing in the Yucatán Peninsula of Mexico