Florida’s coastal shorelines are changing daily with development, nutrient runoff and altered waterflows, impacting sensitive tarpon nursery habitats. Juvenile tarpon (12” and under) rely on tidal mangrove creeks and other backcountry habitats that are not sufficiently protected. To prevent the further decline of Florida’s tarpon fishery, a major driver of the state’s $9.2 billion recreational saltwater fishery, BTT has worked extensively to identify the most important juvenile tarpon habitat for resource managers to prioritize for protection and conservation.

BTT launched the Juvenile Tarpon Habitat Mapping Project in 2016, calling on local anglers, guides and residents to help scientists identify juvenile tarpon habitats that were “natural” or “altered.” This was the first step in a process with one goal: protect and restore important nursery habitats for tarpon (and snook).

The response over the past five years has enabled scientists to compile over 250 sites and select two test regions, Charlotte harbor and Indian River Lagoon, to map in greater detail. These outcomes followed a series of steps designed to “ground-truth” and characterize reported habitats. During 2018, BTT scientists and field technicians recorded in-field habitat data for each angler-reported site within the test regions. Scientists focused on collecting data such as water depth, shoreline vegetation, and verified if the reported site was natural or degraded (you can read this published manuscript here). Simultaneously, BTT was monitoring a juvenile tarpon and snook restoration project in Southwest Florida, where we used three different nursery habitat designs to determine which was the most productive. Not only was BTT nailing down the “where,” but also the how.

The next step was to create a Geographic Information System (GIS) map to compile and analyze all of the data on nursery habitat characteristics. The result would show which natural sites could be protected and rank the altered sites in order of restoration priority. In January 2021, BTT launched the GIS mapping project, which was based in the test region that had the most geographic data and potential for restoration: Charlotte Harbor.

BTT’s integrative GIS map (below) is now at 80 percent completion and will be presented at BTT’s 7th International Science Symposium and Flats Expo in November 2021. This map will specifically inform managers at the local, state and federal level where there are natural nursery habitats in the Charlotte Harbor watershed that should be protected. Additionally, BTT scientists generated a habitat restoration ranking analysis that prioritizes degraded or altered nursery habitats for agencies that fund and implement habitat restoration. Upon the completion of our post-restoration monitoring in December 2021, BTT will also be able to report which design elements are most effective for juvenile tarpon and snook nursery habitat restoration projects.

With the severe loss of juvenile tarpon habitat in Florida, protection of remaining natural habitats and effective restoration of altered habitats is the only solution to ensure the long-term health of the state’s tarpon fishery and BTT is leading the way.

This map is a large-scale depiction of juvenile tarpon sites (indicated with stars) collected during the Juvenile Tarpon Habitat Mapping Project. A special thank you to all who provided juvenile tarpon locations. All locations reported by anglers are confidential and will not be shared. 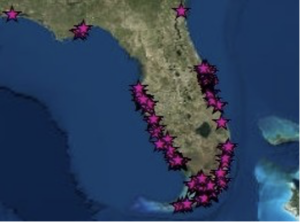