It all had to happen just so: A few days strung together with light winds to flatten the ocean off North Carolina’s coast, warm water to push the fish high and keep them happy, Spanish mackerel and menhaden and ladyfish thick on the beach, a morning of falling tide, an angler willing to roll the dice and skillful enough to make it happen—and 15 years of dreaming, scheming, striking out, and never giving up on the part of guide Seth Vernon. But when angler Ben Klein hook, fought, and landed a 50- to 60-pound tarpon on July 1, the spell was broken.

For Vernon, who’s guided out of Wilmington for 14 years, pulling off such a feat required not only the right conditions, but the right angler. “I always thought it would happen,” he says. “It was a matter of timing and patience and putting in the work and having somebody who was willing to take the journey with me. To sight, hook, and catch a tarpon on the fly in North Carolina? Really? It takes a special angler to be willing to go after such a dream.”

He and Klein have been fishing together for 15 years, Vernon says, “and we wanted to do it honest.” Instead of posting up to intercept migrating fish, Vernon poled to sighted fish, while Klein worked a Vernon-tied purple tarpon mouse on an IGFA-approved 16-pound leader. Vernon hunted the break between the outer beach bar and the nearshore slough. When they sighted fish just off of the beach break, Klein back-cast to a string of tarpon at 60 feet, and the first fish in the string picked up the fly and headed straight for the boat before spitting out the mouse. “Ben didn’t blink,” Vernon says. “He picked up the fly, back-cast, and fired again. The second fish picked it up on the third strip and there was no question. He literally garbage-canned the fly in a giant boil, then turned and headed for the beach. Which is what we wanted.” 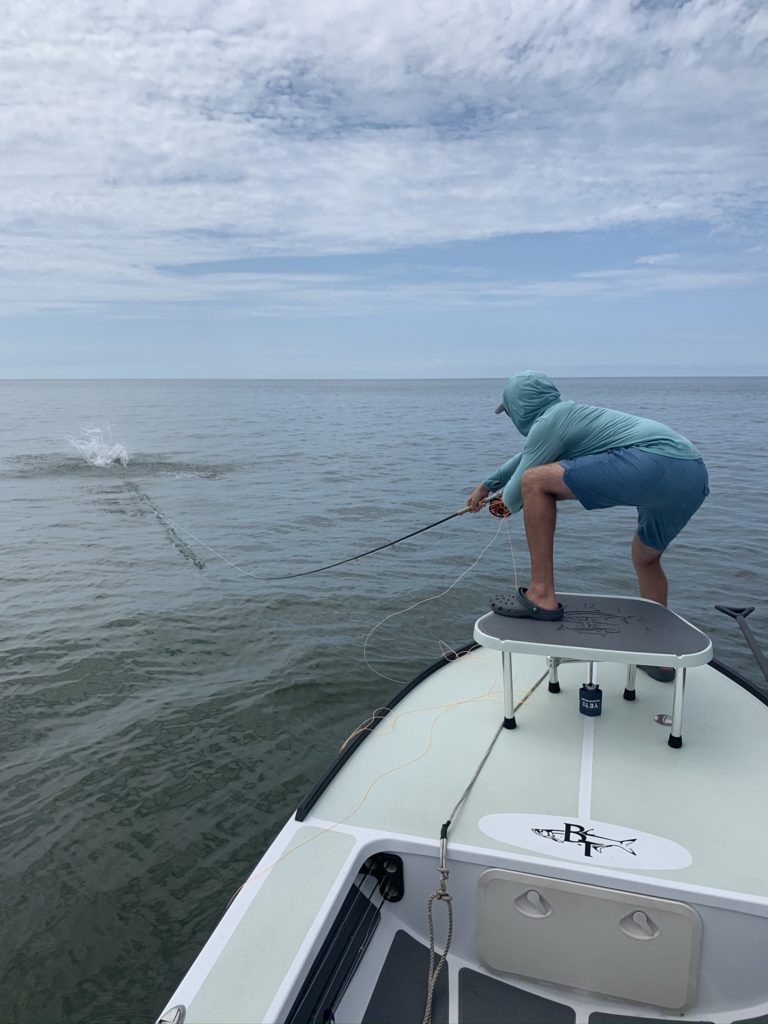 The take and run were so immediate that Kline worked the fish by hand for the first five minutes, letting line slide through his hands through three jumps, before he could get the fish on the reel. The fight lasted about 20 minutes. At one point the tarpon surged directly under the boat. The fish was hooked in the bottom jaw, so pulling on the leader seemed to close that big trapdoor shut. “I had the leader in my hand six times,” Vernon says, “but the fish simply would not give me his head. There were moments of sheer panic for both of us.”

The feat is not only indicative of the skill of both Klein and Vernon, but a resounding testament to the conservation work of BTT. In 2016, BTT launched the five-year Tarpon Acoustic Tagging Project, sponsored by Maverick Boat Group, to broaden its understanding of tarpon movements and habitat use. The results will inform future conservation measures, including the protection of important habitats, addressing water quality issues, and improvements to the management of the fishery. Unlike satellite tags, which often detach from tarpon after a few months, acoustic tags are surgically implanted in the fish’s abdomen and have a battery life of five to seven years. And unlike satellite tags, which are large and require the fish to be 100 pounds or more, acoustic tags can be implanted in tarpon as small as five pounds and as large as 200 pounds, allowing scientists to study fish in a wide range of size and age. Every time a fish swims near an underwater receiver, a unique sonic code is recorded. BTT has deployed nearly 100 receivers and, through reciprocal agreements with researchers studying other species, has tapped into a vast network of more than 4,000 receivers stretching from the Gulf of Mexico to Chesapeake Bay. As scientists detect tagged tarpon on their receiver networks, they share data with BTT. 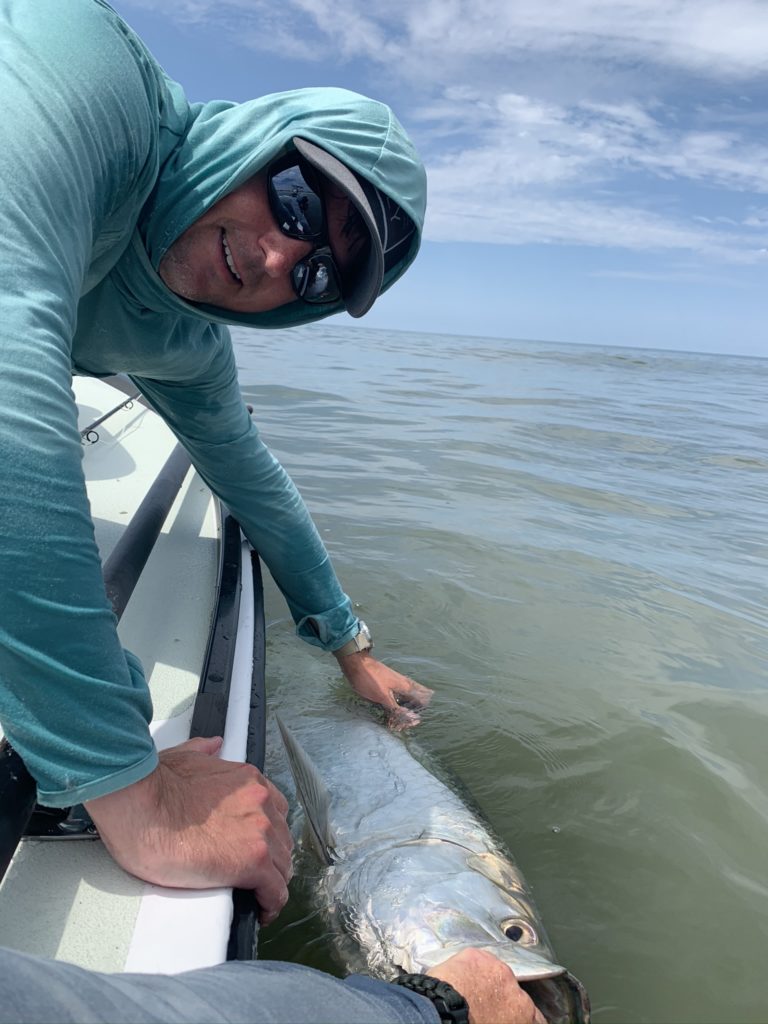 To date, BTT has tagged more than 180 tarpon, most of which were caught in the Florida Keys. Others were tagged in Apalachicola, Charlotte Harbor, Tampa Bay, Georgia, South Carolina, and Texas. These fish, which range in size from 10 pounds to 165 pounds, have produced more than 172,000 detections to date, providing BTT scientists with valuable new insights into the fishery.

One of the first fish tagged was a 65-pound male tarpon tagged in the Lower Keys in May of 2016. It began its migration up the East Coast in July, making it all the way through North Carolina’s waters to Virginia Beach in 52 days. The next season, that tagged tarpon moved north to North Carolina again. Although this project is not yet complete, BTT is already using early findings to support conservation and management efforts. In late 2019, BTT used tracking data on migrating tarpon to advocate for greater protection of the species in North Carolina. BTT spoke at the NC Marine Fisheries Commission in support of an amendment to an existing regulation that would make the species catch and release only in state waters.

Thankfully, that amendment passed on February 20, 2020, and now the law prohibits possession of tarpon and makes it illegal to gaff, spear, or puncture tarpon by any method other than hook and line. BTT applauds the NC Marine Fisheries Commission for taking this important step to improve the state’s management of the tarpon fishery, which will strengthen regional tarpon conservation. “Protecting this magnificent fish while it spends time in our North Carolina waters is a great move by the NC Division of Marine Fisheries Commission Board,” said Capt. Jot Owens, North Carolina fishing guide and BTT Conservation Captain. “Thank you to everyone who supported this amendment and a special thanks to the Commission board members who voted in favor of this ruling.”

Tarpon protections such as this give more anglers like Seth Vernon and Ben Klein hope that what happened on the first day of July will become less of an anomaly.

“That feat was my Everest,” says Vernon. “For years I’ve known the fish were there, and I’ve lost sleep and been haunted by their presence.”

Here’s betting that he’ll lose just as much sleep dreaming of round two.

An award-winning author and journalist, T. Edward Nickens is editor-at-large of Field & Stream and a contributing editor for Garden & Gun and Audubon magazine.